Calder used to be our most reliable janitor. He would turn off lights and fans when not in use. He would pick up used clothes to put in the laundry basket. I could also entrust him to hang the laundry on the clothes rack. He was so thorough he would check the washing machine to see if there were remaining damp clothes for hanging. So thorough he wanted to use every clip on the round clip hangers (I had to assure him it's ok to leave some clips empty; socks and undies are ok but the shirt is too big to be clipped up). Then adolescence set in (some time in second half of 2016) and he lost his initiative. He would not do anything unless instructed and repeatedly instructed too. If I pass him a pile of damp laundry, he would hold on to an item and linger at the clothes rack, waiting for reminders to get the task done. He allowed himself to be distracted by windows and mirrors. And if unsupervised, there would just be one item on the clothes rack when I come to check later. In the mornings, he could leave his fan spinning while he stepped out of his bedroom. Previously he had to wait until the fan stopped spinning. And he no longer picked up the clothes that his sister left on the floor. It was so tiresome to get him to complete tasks that I stopped asking him to help. But oh, how I mourn the loss of our janitor!  Three days ago, I flippantly asked him to hang the clothes. To my surprise, he did not disappear after hanging one item. He stayed at the clothes rack and actually completed the task very deftly. Yesterday I tried again and once again he got the task done. Today is the third try, and now I can confirm that our janitor has returned. Praise the Lord!

Posted by Brenda Tan at 9:26 PM No comments:

This morning, Calder and I waited for his school bus for some 20 minutes before I messaged the bus aunty to ask if they're arriving. They had come and gone! So I told Calder: Never mind, Mommy will bring you to school by cab. So we went home for Mommy to change. Calder waited while Mommy fumbled with the Uber app, trying to use it for the first time but in vain (it says 8x the usual fare!). Then we walked out to the main road to hail a cab. Calder stood quietly in the sun while Mommy tried to spot an empty cab. Two other aunties waiting for cab. So Mommy decided: instead of going to St Andrew's Autism School, we shall meet Calder's teachers and classmates at Changi Airport (they have class outing there today). So we went home again for Mommy to pick up a book before heading to the bus stop. One hour of bus ride later, we reached Terminal 3. Calder's class arrived just a few minutes later! So Mommy handed Calder over to his teachers before rushing off for dental appointment. In all this time, Calder did not get upset or fret over the multiple  changes in plan. You have improved so much, my darling! Mommy is very proud of you!

Calder answers "yes" by default to any question. Actually he answers "yeah" very softly. So I decided to improve his "yes" confidence and also teach him to say "no" appropriately. Found a free app that may do just the trick. 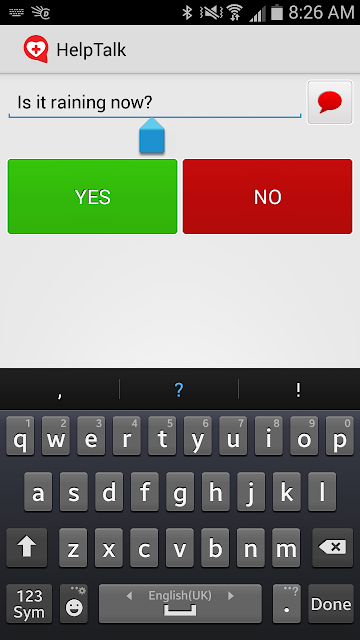