One Saturday, Calder and I joined another 23 pairs of caregiver-child for rock climbing at Climb Central. Our first time doing this and since it was heavily subsidized, I thought: Why not?

As usual, Calder was very happy to go out, especially on a train ride, and a ride to Stadium MRT too, a station he's familiar with from the few times we joined the Runninghour for weekday jogs. As instructed by the organiser, I asked Calder to go to the toilet. Had to call him to come out of the Gents when done. Then I asked him to sit on the floor and drink from his water bottle while I used the Ladies.

When we arrived at Kallang Wave Mall, we saw many people scaling the walls. Headed to the party room as instructed. Nice and quiet place. There're snack packs for us, how lovely. Fitted in climbing shoes and harness, Calder downed his packet of Milo and biscuits and cake. Met familiar faces from his autism school, and I started chatting with the parents.

Our turn. Out to the walls and Calder started climbing. Up and up. Nearly halfway, he became uncertain - unsure where to put his hands and feet, and getting tired, I presume. He looked down at me and I cheered: Calder, up up up! And being his cooperative self, he continued climbing.

Now came the tricky part. The belayer (girl holding the rope) asked me to get him to move to the left (he was advancing rightwards). I told her, "Sorry he doesn't know left from right." Never mind. And when he finally reached the top, the girl instructed, "Let go, Calder!" And I had to explain: He doesn't know what "let go" means.  So Calder climbed his way down.

Mommy's turn. Up and up. Since Calder was watching, I was determined to do it well. Halfway, I began to feel the strain of my own weight and thought: Maybe this is good enough. But I need to show a good example to my boy, so another step up and another pull. Gosh, the things I do for my son.

When I turned my head to see how he was down there, it was with delight to see him on the wall to my right, making his second climb. We are doing this together - a magical moment of realisation. The belayer had assured me I could let go and rest while she hung on to my rope, so I took a break to shout encouragements to Calder. When he reached my level, we continued climbing together. And reached the top. This time, I could demonstrate to teach him how to let go. And I witnessed his glee at the ease of descent.

"Calder, do you want to do again or is it enough?" Enough. "Is it enough or do you want to do again?" I had to phrase my question in 2 different ways to make sure he wasn't merely echoing me. Certain that he had had enough (frankly I couldn't imagine going up another time myself), we went back to the party room to remove climbing shoes and harness, then came out and sat a while watching other people climb, and left for lunch.

I was very proud when the belayer commented that Calder's good at climbing. And very proud to have reached the top myself. This is a good sport to engage in, if only it's not so expensive. I hope establishments like this would give discounts to people with special needs. Very thankful to the parent who organised this (having to attend to us while taking care of her restless boy). I think we should have more of such healthy gatherings of families with special needs, for the camaraderie of meeting like "warriors" and the consolation that we're in this together. 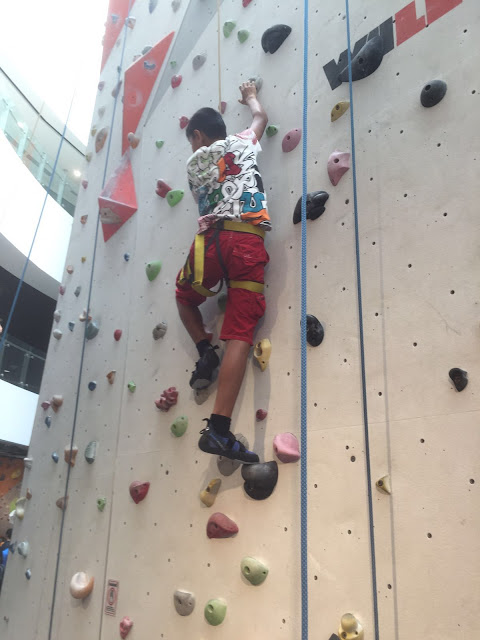 Today Calder participated in an audition in his school, held by Beautiful Mind Charity (BMC). I thought it was a vocal audition so didn't bring his piano scores. But he went straight to the piano when he entered the audition room. And started playing "You are My Sunshine" which he has been practising for his class' Teachers' Day presentation. There was a panel of lady judges who looked Korean who had most beatific smiles like they belong to a choir of angels. They asked him to play other songs which he did imperfectly since he didn't have the scores. One of them asked me if he can read music. "No, he can't. If you point to a note and ask him what it is, he wouldn't be able to answer you. But he associates the score with finger positions and he uses memory to play the song," I explained. They asked him "how old are you" and as usual he answered "I'm fine thank you". Then they decided to test his vocal potential. Can he play and sing? No, he cannot, I answered. And when the music teacher-in-charge moved to the piano preparing to provide accompaniment, I told her it may be better to let him sing by himself. Because usually he cannot do 2 things - in this case listen and sing at the same time. We asked him to sing "You are My Sunshine" but he thought we wanted him to play the song again so I gestured for him to come over and I put an arm around him to keep him still. He had been pacing around and beaming (he responds to mood; I supposed the angels must have been radiating very positive vibes). He leaned over to smell my hair as is his habit and the judges exclaimed, "Look at his smile! So cute!" And the music teacher-in-charge verified that yes, he is a very happy boy. So Calder sang "You are My Sunshine" and when he reached the high notes, he dived an octave lower, as is his habit. Then they asked him to sing "Twinkle Twinkle Little Star" to piano accompaniment.  The tricky part is the music changed pitch at every line. Calder sang at the same pitch throughout. So if you ask me if he has a chance of being accepted, I think: Ha! Only God knows. And indeed, I pray that whatever the outcome, it'll mean  joy for Calder and the family. At the end of the audition, I put out my thumb and cheered: "Good job, Calder!" And he beamed. Maybe he'll get accepted after all, because he has a beautiful mind.

I taught Calder how to turn on the video to watch his favourite shows. It involved many steps, including setting English subtitles, changing volume, using the relevant remote control, even pointing the remote control in the right direction. But today I witnessed Calder’s glee when the TV "obeyed" him and know it's all worth it. 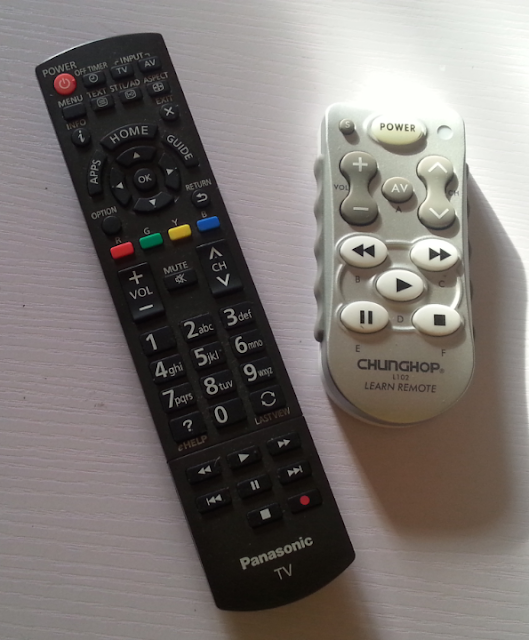 Posted by Brenda Tan at 8:20 AM No comments: