Ethel went to my sister's house for sleepover. With the outspoken one gone, our home became a silent movie. But then I realised I could bring Calder anywhere I want. Being of little speech, he does not counter decisions, nor does he complain. I decided that I missed my favourite noodles, so we made our way  to Fortune Centre for lunch. Ethel wouldn't understand why one would go such distance for a bowl of noodles. But Calder loves travelling! So we ate my favourite vegetarian udon yesterday, and my favourite fish noodles today. Life is good! 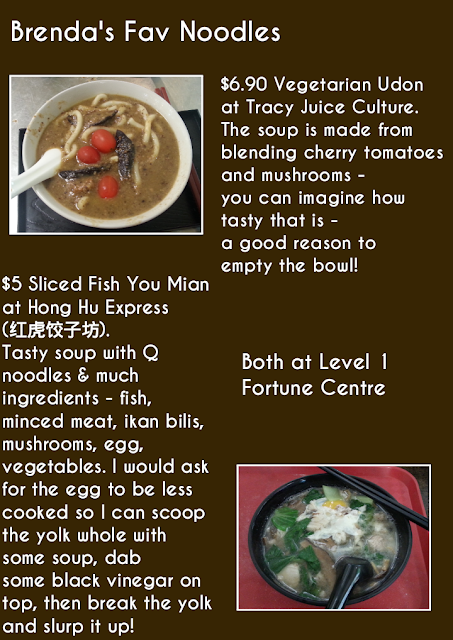 A taxi driver we met in Taiwan has this to say about his relative (a cousin's son in his 20s) who has autism:

"You must always agree with him. You must treat him like he is your very best friend in the whole wide world, closer to him than his parents."

This taxi driver went on to hold Calder's hand during our tour of Taroko Gorge. 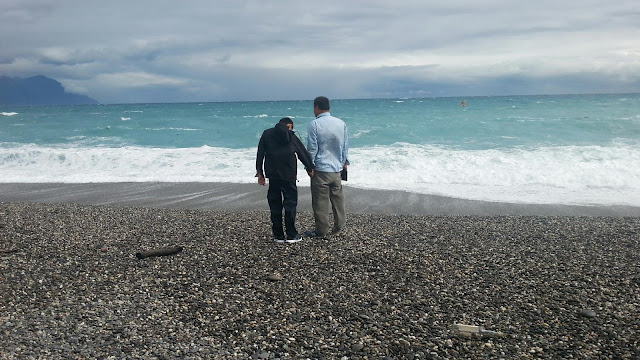 Why all eateries should have booth seats:

1. With a fixed bench, the restless child with autism will not shift his chair backwards and more backwards until he gets in others' way or he's too far away from his food on the table.

2. You can seat the child at the corner to keep him from running away or sliding into another territory.

3. The corner makes the child with autism feel safe and cozy. 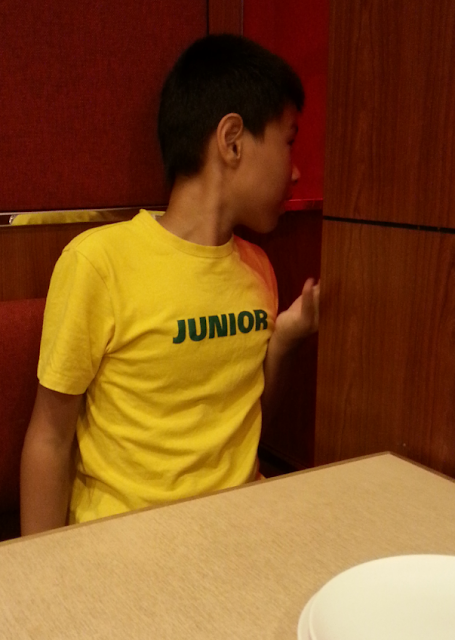 Someone asked me to post our Taiwan itinerary on this blog so here it is. We travelled in a family of four (two adults, one 9-year-old girl and one 12-year-old boy with autism). I would recommend Toucheng Leisure Farm, Farglory Ocean Park and Dr Fish. Our trip spanned 21 to 30 Nov 2016. 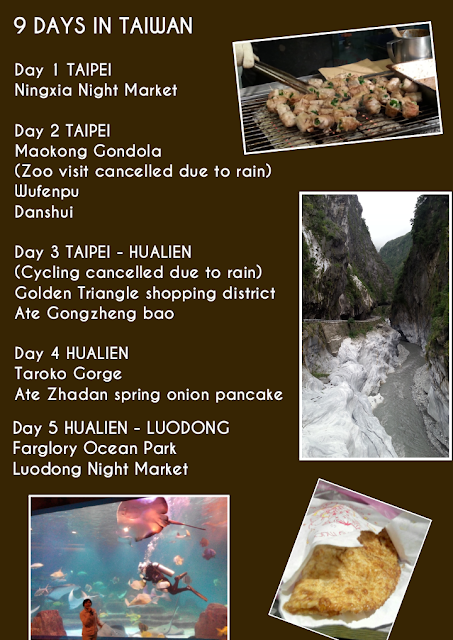 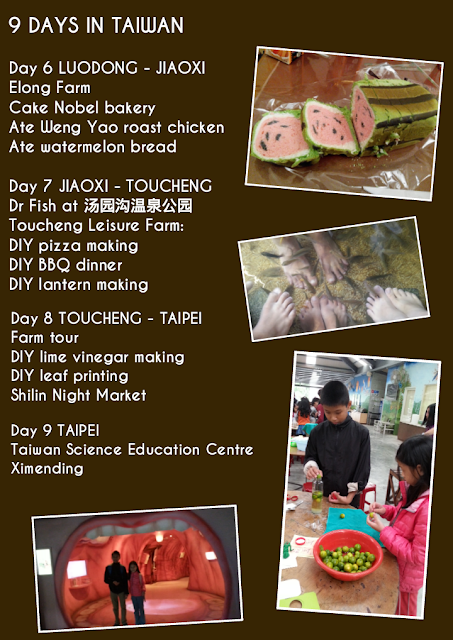 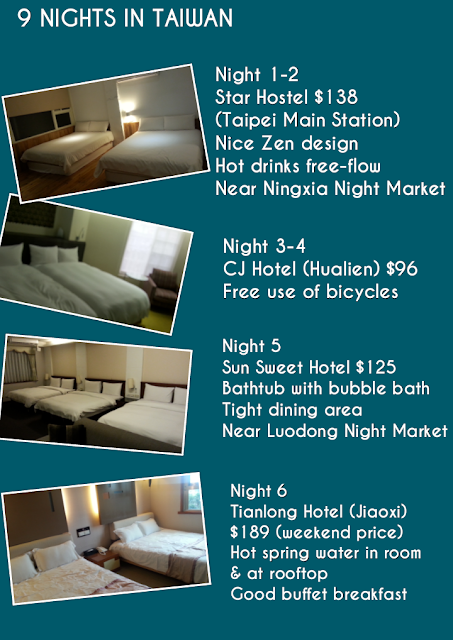 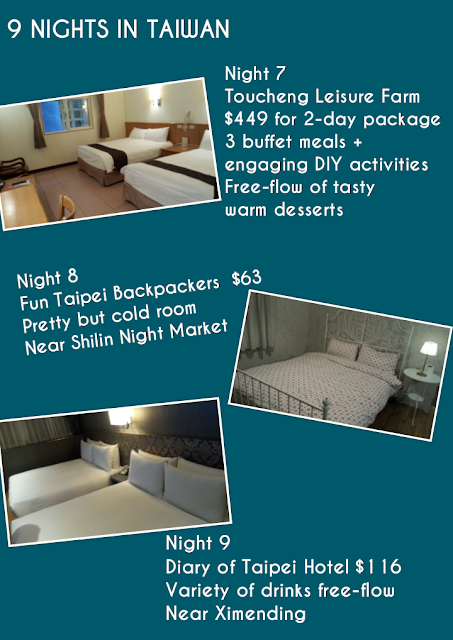 My family went to Taiwan from 21 to 30 Nov this year (2016). It is our fourth trip involving plane travel. Even as I write about our Taiwan trip, I am very thankful that Calder can travel with us. I know of many families who find travelling with their autistic children too stressful. People with autism like things to stay the same. But travelling is about new places and new routine. Parents are also afraid their autistic children would melt down in unfamiliar public settings.

Calder likes familiarity. Fortunately, over the years, he has improved in his adaptability to be able to accept familiarity by concept. He may not get to stay in the same hotel, but so long as it is a hotel (characterised by clean beds and tidy set-ups), he is happy. During our 10 days in Taiwan, we stayed in 7 different accommodations. We had no problem moving him from one hotel to another. I must admit though, that Calder seemed to lose his delight of hotels as we reached the end of our trip. Perhaps because it had become apparent that we were not staying more than a night in each of them.

Then there is the flight experience. You know how it is that the change in air pressure can upset babies, and make them cry non-stop. I'm not surprised that children with autism, with their highly sensitive senses, would be likewise disturbed. Take-off feels like taking an elevator upwards, so that's fine for Calder. In fact, he looked positively excited when our plane ascended. It's the descent that is tricky because that's when ears start getting blocked. When Calder took his first plane, he was nine. I remember his panic when the plane descended. He dug his fingers into his ears as he cried out, "Take out! Take out!" Unfortunately, ears do not reliably pop once the plane touches down, so we had to pull him along as we cajoled him out from the plane cabin into the airport. The second time he took a plane, he was apparently more prepared so there was less fuss. I tried to help by giving him soft sweets to chew as the plane made its descent. In this fourth trip, Calder began looking worried when our plan descended onto Taiwan, and what I did was to constantly give him more pomegranate kernels to chew. I was less successful on our return to Singapore. Already insecure because of the descent, Calder took offence when I asked him not to push the screen too hard (he was correcting its angle) because it would disturb the passenger in front. It didn't help that the air stewardess spoke in sharp and urgent tone for Ethel to restore her arm rest and to stow her bag under the front seat. Meanwhile, Calder had begun his chanting, repeating phrases like "what happened to your neck", "twisting neck is ugly" as he is apt to do when he approaches distress. I gave him soft candies. He suddenly stood up and said "shee shee". Oops, no toilet when the plane is descending. I gave him more Ricola gummies. Fortunately the unease did not end in a meltdown. By the time we proceeded to pick up our luggage from the conveyor belt, Calder had regained his composure.

Although he appeared to have enjoyed himself, I wouldn't say Calder was entirely cooperative during our Taiwan trip. You see, after he entered adolescence a few months ago, he had been testing our patience by not doing what's expected of him. So we had to remind him several times before he would put on his socks and then shoes. It was as though he had lost his sense of hearing, or that instructions and their impact would disappear into the air as seconds tick by. And if we wished for him to walk with us, one of us had to hold his hand. Once that hand was released, he would turn and walk off in the opposite direction. This happened several times when we were in Taiwan. Unfortunately, when we expressed our disapproval over such behaviour, it could start another round of dismay mounting to distress and we had to do damage repair once again. Woe is he who ruffle Calder because he would then face the arduous task of calming the agitated. But I noticed a curious phenomenon - a blast of cold wind on the street of Taiwan could restore Calder's happiness.

So yes, going to Taiwan during the last week of November was a good idea because the weather was cool, even cold. (Calder does not take well to heat.) Our trip was also an enjoyable one for him because we went around mainly by train. Calder loves travelling by train, by bus, by taxi - in this order of preference. Then there were the many sweet drinks he could consume - the various juices on the plane, the drinks we wanted to try in Taiwan: papaya milk, bubble tea etc.; he even found his favourite Sjora mango-and-peach juice in our last hotel.

Let me list 7 things that made Calder smile in this Taiwan trip:

Considering the cheap food and amiable people (taxi drivers, especially) and ease of communication - yes, we are returning to Taiwan again. 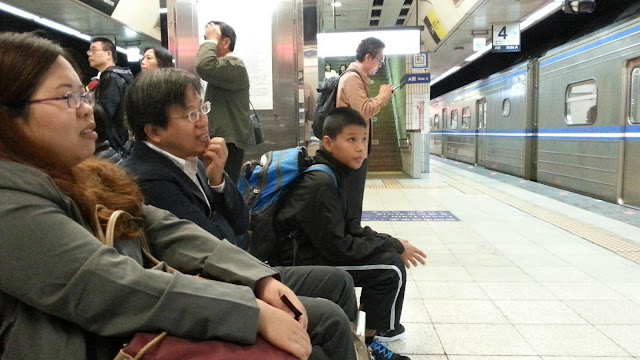