Today I got Calder to eat pomegranate with chopsticks. He would target one and prod until he managed to pick it up. What perseverance! Good training for fine motor skills. 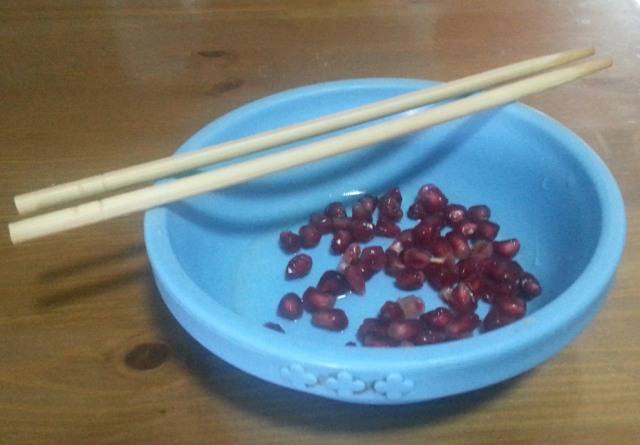 It was one of Calder's routines, after turning off the switch, to wait for the fan to stop spinning before exiting his bedroom. He used to get flustered when wind from his open window kept the blades turning. But this morning, he strode out of his bedroom without a second glance at the still-moving fan. Habits can change, even for a child with autism.

Posted by Brenda Tan at 8:32 AM No comments:

A few days ago, I reminded Ethel to practice her piano before Calder returned from school. Otherwise, she would make impatient sounds when she couldn’t get the music right, and Calder would get all excited and start flapping around, and then she would scream at him to stop.

Before I walked away, I heard Ethel quietly say, “I love Calder.”

That really stopped me in my track.

For a long time, I’d been trying to explain to my girl that her elder brother could not help his reactions - turning hyper and hilarious when she’s upset. She was convinced that he meant to insult her. What usually happens, unfortunately, is that she would get upset over piano (she’s a perfectionist who wants to get every note right), he’d start flapping his hands and hovering around her, she’d scream at him to go away and most likely slam the door, and Calder would be banished to the bedroom. This happened again and again and I watched Ethel becoming more and more antagonistic toward her brother. It became so bad that if he even as peer closely at her, she would turn black with suspicion and shout at him.

It’s a balancing act mediating between two children, especially if one is outspoken and the other almost mute. Ethel challenged me, “Why are you always speaking for koko?” I answered, “That’s because koko cannot speak for himself.” But I know I cannot do this often, because my girl would feel more and more alienated and would dislike her brother more and more. I can only pray for God to draw them together.

So when Ethel spontaneously confessed that she loves Calder, I had to ask, “Why did you say that?”

“Because Calder is nice.”

Ah, she must have come to this conclusion from the recent session playing with him on the bed. Between my two children, “playing” usually means Ethel ordering Calder to do something and him complying. In this case, she had caught him humming, and so got him to perform the song while lying on the bed, one leg balanced on another. They had not played together for a while. No wonder Ethel could not see and appreciate her brother’s sweet disposition.

Back to Scene One, where Ethel continued:

“The only thing I don’t like about him is he laughs when I cry.”

Praise God for her enlightenment.

And praise God for love that covers all wrongs.