Sordid business but I'm going to list here the steps to cleaning up after a poop. I have been the one cleaning Calder's bottom and thought it's a role I'm stuck in for the rest of my life. I even thought I'd have to train Ethel so she could take over when I'm too old for the job or when I'm gone.

We've been trying to teach Calder to clean up himself for years. I followed an online advice and got him to practise wiping peanut butter smeared onto a plate. But just as he  had to be reminded to erase thoroughly for a correction, he didn't seem to see the need to thoroughly clean his backside. And so he would perfunctorily wipe when instructed but never aiming to clean off all the dirt. And if I do not want to wash and scrub at underwear, I would sigh and take over the wiping.

When I first decided to chart the steps for Calder to follow, I spent some time finding out the best way for him to do it. In my book "Come into My World: 31 Stories of Autism in Singapore", a mom shared that she used the cue: "1 ,2, 3 wipe. Check. Dirty? Take more toilet paper." But when I followed this, Calder wound up with a toilet bowl clogged with toilet paper. How many squares should he tear out? How many times should he fold them? I tried to find specific instructions on the web but in vain. And there are so many ways to tackle the same goal. Some advocate washing instead of wiping. Some suggest wet wipes. Some say crush the toilet paper. Some assume folding.

One very good thing about Calder is he  functions well on clockwork. Even his body obeys the clock - so we could get him to poop at regular timing. At first, it's right after breakfast. Then it became first thing in the morning after a cup of water (this is more convenient if the family goes out in the early morning). So I could train Calder regularly.

But it was not easy because he lacked the motivation. Someone had to prompt and check. Even when supervised, he could never get clean enough. It was perfunctory dabbing rather than wiping. Could it be that his hand just couldn't reach far enough? After much trial-and-error, we solved the problem by getting him to prop one foot up on the toilet bowl as he wipes (note that he empties his bowels at fixed timing at home, so there's little danger of him dirtying public toilet this way). I used to wash him with soap after wiping but figured it's easier for him to use wet wipes on himself, so I taught him the difference in disposal - wet wipes must never be thrown into the toilet bowl.

Much human efforts were invested in this self-care that comes naturally to many of us. But the turning point is God- inspired. Recently, at 12, the cloud lifted and Calder stopped waiting for instructions for every move. He became more aware of what's expected of him and began to want to do things by himself. That's when the training finally clicked. Now Calder is able to take care of  himself after a poop. Hip hip hooray! For caregivers who are still cleaning up bottoms, here are steps which may be helpful for training in self-care. 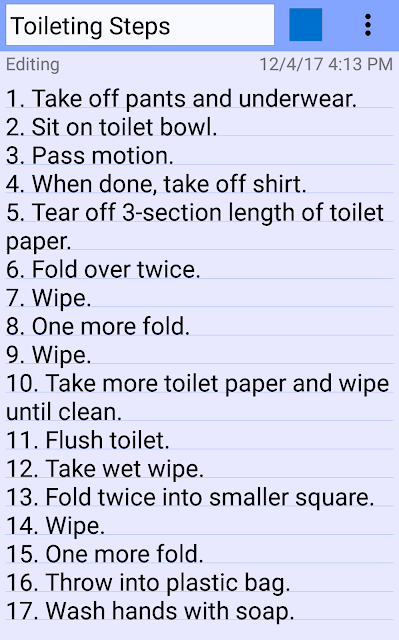