(Scroll down for classroom activities to understand autism better.)

Ever since I published my first book on autism in 2010, I have often been asked to share my experience as a parent. I have a son, Calder, who is autistic. On one occasion, the audience asked me, “Does Calder have friends?” Immediately, I answered, “How do you make friends when you can’t talk?” Have I answered too quickly, I wondered. I asked this question of Calder’s younger sister and she exclaimed, “Oh, his best friend is the lift!”

Let me tell you about Calder.

Calder was diagnosed with moderate autism soon after his third birthday. When he was 18 months old, the pediatrician noticed that he did not understand our speech. He did not turn when she called his name. And when she asked him, “Calder, where is your nose?”, he looked at her blankly. The pediatrician said to me, “Mommy, I think you need to bring him for a developmental check.”

It became clear to me how different Calder was from other neurotypical children. While the other childcare kids were seated and listening to the teacher, he was wandering around the classroom. Or hiding under the table. He did not seem to understand that verbal words could get him what he wanted. Instead of pointing, he would raise my hand toward the item he’s interested in.

When his sister came along, the difference became starker. Ethel talked and talked; it’s as though she had taken over her brother’s quota of words. She’s full of imagination and stories to illustrate and tell. Calder, given free rein, would spend all his time opening and closing doors, flipping the switches on and off, watching the fan spin, flushing the toilet. Even now, his favourite thing to do is to run to lifts to press their buttons. He would watch the lift approach, its door opening and closing, before pressing the button again. In vain would I tell him that we were not taking that lift and so he shouldn’t press its button.

At three, Calder was sent for a formal assessment to find out what’s causing his developmental delay.

Autism explains why he liked things to stay the same. Kaya bread must be followed by jam bread. TV must be followed by music. All shows should only be turned off after the credits had finished their run. The route to school must stay the same. If there’s change of plan, or if somebody suddenly speaks or makes a stern sound, he would melt down. And often, these meltdowns would only cease when he had completely exhausted himself from the loud tears and angry thrashing.

It was hard to prevent such meltdowns because Calder didn’t understand our words. If he did, we would have explained to him why plans had to change. It was hard to resolve the meltdowns because he didn’t have words to tell us why he’s upset. It’s like having a foreigner in the house. Instructions were best demonstrated and most of the time, I found myself using my eyes to assure him that he’s safe.

How can Calder make friends when he doesn’t talk? Surely friendship is about communicating and reciprocating? So, no, Calder doesn’t have friends.

This perception changed when Uncle Leong came into our lives. Uncle Leong is a retiree from the English congregation of our church (we attend the Chinese service). One day, I shared about Calder and his autism to this English congregation. Not long after, Uncle Leong appeared by our side with sugarless sweets for Calder. When he found out that Calder preferred chocolates, the sweets turned to Rocher. Then he learned that Calder likes to eat pao (Chinese buns). He started delivering tasty cha siew pao to our home. Now he visits us weekly. If we were not out delivering autism books (Calder likes car rides), Uncle Leong would sit beside Calder in our living room while Calder plays bowling on his handphone, or while we watch a video recording of Calder when younger (because Calder likes to watch himself, we have more than 30 of such recordings).

Does Calder talk to Uncle Leong? Apart from the standard greeting (“Hello Uncle Leong!”) and answers to simple questions like “Is Calder happy?”, hardly. But Uncle Leong is definitely a friend of Calder – his best friend, in fact.

So I was wrong to assume that friendship must involve communication, and give-and-take. Instead, a friend is someone who is happy when you are happy, sad when you are sad.

Not long ago, I was asked to speak to a group of youths on how we can befriend people with special needs. I decided to find out by asking special-needs persons directly. Very soon, I realized that many autistics among the special needs community cannot answer survey questions like “How can we be kind to you” or “How can we be your friend?” They either lack the words or the concepts are too abstract for them. So the parents answered on their behalf. Among those who could express themselves through writing, it was apparent how hungry they are for friends, how needful of support.

So I decided that beside helping the public understand what autism is (for the individuals and their family), I would like to share how we can be a friend to the autistic:

I hope that having understood autism better, you would be willing to reach out and support people with autism, verbal or non-verbal. May you be the friend that brings sunshine into their lives.

Autism is a brain condition that causes difficulty in communication and social interaction. Observable from childhood, autism is also characterized by repetitive behavior or intense interests.

(The above article was adapted for use in Mar 2019 issue of What's Up, Singapore's newspaper for students.)

When I was interviewing autistic adults for my new book “MY WAY: 31 Stories of Independent Autism”, the issue of bullying kept cropping up. It seems to be part and parcel of the autistic life! Indeed, research has found that autistic children are four times as likely to be bullied than neurotypical children. Bullying is considered to have taken place if a person intentionally and repeatedly hurt someone who is less powerful. This hurt can be physical, verbal, social or cyber. In an online survey, 192 parents in Canada and United States were asked how often their autistic children (5 to 21 years old) were bullied in the past month and how long the bullying persisted. A high 77% reported bullying in the past month. 53% of these children were victimized more than once a week. 54% of the cases had lasted more than a year.

Why are autistic children so vulnerable? They may have been targeted because of their strange interests or behaviours. When bullied, they lack the communication skills to explain or assert themselves. Many are easily distressed, which encourage bullies to carry on. Due to poor social skills, autistic children lack friends who might otherwise protect them.

Indeed, peers make a big difference. It has been found that bullying lasts longer when there is an audience. This is because bullies enjoy the attention given to their display of power.  So if you merely watch a bullying episode, you are actually prolonging the hurt being done. On the other hand, if you intervene, the bullying would stop in 50% of the cases.

Hence, one way to discourage such bullying is to for peers to understand their role as defenders of the weak. The school should have a clear system where these peers can go to safely report bullying. Structures can also be put in place to encourage mingling and making of friends. Instead of leaving it to the students to find their own teams or their own seating partner, the teacher can make the decision. This way, the socially awkward autistic child is less likely to be left out. It has also been found that children are more welcoming towards peers with special needs if they have a better knowledge of the special needs. Hence, another way to promote inclusion is to organize talks on special needs for the student population.

(The above information is taken from “Bullying Experiences Among Children and Youth with Autism Spectrum Disorders” by M. Catherine Cappadocia, Jonathan A. Weiss and Debra Pepler as published in Journal of Autism & Development, 2012.)

Who is Brenda Tan?

Brenda Tan is an ex-journalist with more than 10 years of experience teaching English in tertiary institutions like Nanyang Technological University and Singapore Institute of Technology. After her son was born, Brenda started writing about autism. She published “Come into My World: 31 Stories of Autism in Singapore” in 2010 and “MY WAY: 31 Stories of Independent Autism” in 2018. To enable the public to understand autism better, Brenda has accepted many invitations to share her experience as a parent  and writer. Brenda has two children: 11-year-old Ethel and 14-year-old Calder who is autistic. Brenda can be contacted at www.come-into-my-world.com .

(The results of Brenda’s survey on inclusion:
http://brendaandautism.blogspot.com/2018/09/how-can-we-be-your-friend.html )

1. At the end of a day, a Mom and Dad talk about their child with autism. Write a script of their dialogue.
E.g.
Dad: How was your son today?
Mom:
Dad:
Mom:

2. Imagine you have autism. Write a diary entry.

3. Find out about the needs of children with autism. Propose an invention that can help them.

4. Watch http://www.come-into-my-world.com/autism-video-2. Discuss how autism may affect the sibling. 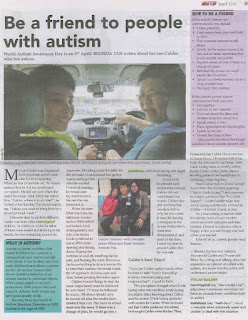