The last time we were in Gold Coast (4 years ago), we visited Dreamworld and White Waterworld. This time, we were headed for Movie World, Sea World and Wet N Wild. Unfortunately there were only a few rides at Movie World that we could take. Most were max-thrill which we avoid (we were not inclined to scare ourselves silly). The mild-thrill ones were mostly for small kids. There were only two rides under the moderate-thrill category, one of which (Scooby-Doo) was under maintenance and the other (Wild West Falls) Ethel rejected - boat rushing down to the waters would give her stomachache, she said. She looked worried while queuing for the small roller coaster too. My girl who used to squeal over theme parks had become wary of thrill rides - looks like she had outgrown theme parks. In this trip, she was more interested in finishing the Hunger Games (e-book) on her mobile and shopping (we were looking for cheap and nice 2-piece swimwear - alas the selection was very limited at K-Mart) and feeding ducks. As for Calder, he was as usual most interested in food - I made and brought along ham-and-cheese sandwiches. We also enjoyed cinammon-walnut-apple rolls (from supermarket). He followed us compliantly (more accurately - he walked fast but obediently returned when we called out to him) for the rides and shows and was rather engrossed watching the big roller coaster in action. When we arrived at the bumper cars, I was wondering if I should let him ride alone - he is after all so big in a small car. But decided to join him and good thing I did. I left him to do the steering and he went opposite direction from the other cars! And when our car bumped onto the side, he got really annoyed and started making loud angry Tarzan sounds. Intuitively I warned the Dad and sister not to bump us.

Since there were so few suitable rides, we proceeded to Wet N Wild early and enjoyed the wave pool as well as the lazy river. Tried the tunnel slide (Black Hole) which Ethel really liked. But carrying that two-person float up the long flight of stairs was too much for me so I left her to go the second round with her Dad.

We went to Sea World the next day. It had no chance because our shopping was scheduled right after and Ethel kept asking if we could proceed to K-Mart already. We went to the food court for dinner and Ethel chose to eat Subway which she shared with her Dad. I would have ordered something else (since Subway is ubiquitous in Singapore) but I figured I better order the same, in case Calder pines after what she's eating. That, was another wise choice. Subway tastes so good in Gold Coast (in New Zealand too, as we would later discover)! The teriyaki chicken was a large portion and the vegetables tasted so fresh. And how could tomatoes be so umami? I decided to buy some at the supermarket to eat like fruits. You can tell freshness from the very green stalk.

On our last night in Gold Coast, we stayed at YHA Coolangatta so we could walk to the airport in the wee hours of the morning. Got a family suite. I like it that it uses fan instead of air con. Unfortunately we didn't realise its speed could be increased so it was quite stuffy at night. What's really good at this hostel was the laundry facilities. The washing machines operated by coin ($4 per wash, $1 for powder) and they had many pegs and lines and a good windy space for hanging the laundry.

At the Coolangatta supermarket, we found nice yogurt popsicles that we ate at the beach (Ethel wanted another round of sand and waves). Also bought orange juice that I like. Had ramen craving (after all the bread) so we ate Japanese for dinner. 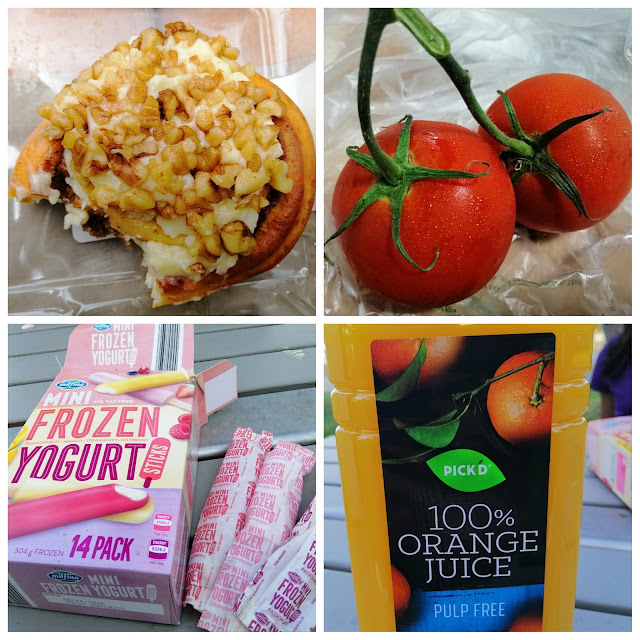