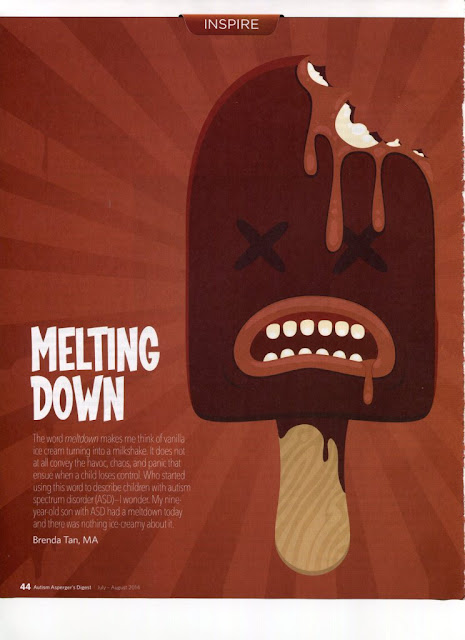 The word “meltdown” makes me think of vanilla ice-cream turning into milk shake. It does not at all convey the havoc, chaos and panic that ensue when a child loses control. Who started using this word to describe autistic children, I wonder. My 9-year-old autistic son had a meltdown today and there was nothing ice-creamy about it.

It was the school holidays and I had brought both my kids to the airport to play. Calder liked going to the airport because of the long bus rides and the cool air-conditioning at the airport. Hence I did not anticipate the meltdown, which took place on our way home.

I felt the unraveling when we were heading for the bus interchange. Calder started pressing and twisting my arm with both of his hands. And when we got up the bus, he slapped his bus card at people. When we sat down, he threw his bag behind him. The passengers behind were kind enough to return the bag without complaint. Then Calder started swiping his hand at me, scratching me and it was all I could do to grab hold of both his arms before they could do further damage.

Meanwhile, my 6-year-old girl, Ethel, came up to me to ask if she could play on my iPhone.

“No, mei mei, go back to your seat. I may need the handphone to call your Dad for help,” I hissed.

Then she came up again and asked if I could give her her yellow booklet for drawing.

“I cannot help you,” I retorted, “Can’t you see that both my hands are tied holding on to Calder?”

Ethel had to return to her seat, a distance from us, resigned to a long journey of boredom. I looked at her, slumped at her seat and thought, “My poor girl. My good girl.”

Then Calder screamed and tried scaling the bus, but he could not go far because I was holding on to his arms for dear life. If the bus passengers had thought this was a problem of discipline, they probably changed their minds when they saw Calder licking the bus. I tried calming him by giving him his favourite music, but he yanked the earphone off. Then I counted to 10. This seemed to have some effect, but after 10, he got agitated again. He chewed at the sleeve of my cardigan, so I took off the cardigan and gave it to him to bite, but he flung it away. Finally, I sang one of his favourite songs, a Chinese Christian number entitled Road of Grace (恩典之路) and that gradually calmed him down. I sang the song over and over again, tapping the beat with one hand over his, then tapping his two hands together, then releasing his hands and tapping the beat on his chest.

One passenger, before getting off the bus, turned to me and said, “You are a great mother.”

My brave countenance buckled and tears started escaping from my eyes. I realized then that I had been in a combat mode, battling a formidable enemy called autism. When this lady’s kind words came to me, it broke the dam. My shoulders finally relaxed and I allowed myself rest for the rest of the journey.

At the end of the one-hour ride, Calder looked happy again. In fact, he began sliding into hysteria, laughing over the unexplained. Ethel came over and climbed onto my lap, wanting a cuddle. I gave her my love in a hug but told her I had to handle her brother before he became hysterical. Otherwise, we would not be able to get home.

“How are you going to get him home?” she asked.

She understood and we got home in one piece. That ended our very harrowing experience of an outing.

I learnt three things from this experience. The first is that a meltdown is easier to cope with when you see it not as misbehavior, but as a momentary weakness. At the end of the bus journey, Calder was bouncing happily on his seat and clapping his hands. Seeing the drastic before-and-after, I lost all intentions to reprimand him for his wild gestures. The second thing I learn is that a meltdown can be resolved with love, instead of strictness or disciplinary actions. The third thing is that autism builds resilience, not only in the parent but also the sibling.

One more thing: Despite scary experiences like this, I would continue to bring Calder out. Why? He likes it and because I love him.

This article was first published in the Jul/Aug 2014 issue of Autism Asperger’s Digest. Brenda Tan is the author of Come into My World: 31 Stories of Autism in Singapore (www.come-into-my-world.com).