One of the things that make Calder happy is when Mommy finds time to guide him in journal writing at the end of the day. Actually, unless I want to introduce a new vocabulary or encourage him to expand his scope of coverage, he doesn't really need guidance any more. I can just sit beside and nod at every sentence he writes, then as part of our routine, get him to read aloud the entry once over before giving him a hi-5 and then a hi-10.

Journal writing is best done when we have spent the day together, because then I can help him find the words to express his experiences. I have tried asking him to write journal when he's spent a day in school but we would get stuck if there's something he cannot put into words. Also, it's difficult to check accuracy when I haven't been with him. The best time is when he has had an unusual day with me. Then he would learn many new phrases and terms just by putting them down in words.

Until Calder started journalling, I never knew he noticed the things around him. He never spoke about them, so it was with great surprise that I found out he remembers them. It could be a phrase I used for a food he ate (e.g. "pork soft-bone") that many months later made its way into his journal, when he ate the food again.

Left to his own device, Calder's journal would be filled with food he ate, transport he took and lift levels he went to. If it's a typical day, one journal record would read just like the previous day's. So I introduce variety by asking him, for example, what someone else ate. Sometimes I asked him to write down important reminders like coming out of the toilet himself instead of waiting for people to call him out.

When he has outings without us, I appreciate deeply when his teachers send me pictures (one or two would suffice) so I can ask what he was doing in those pictures if he has not already volunteered the details of that outing.

How did Calder begin writing journals? It probably started some five years ago, when he was 8. One day, I took a good nap. Yes, the "good nap" is crucial information because it gave me the extra presence of mind to suggest doing something different for bedtime. Calder's usual bedtime consisted of Bible story reading and a short prayer before his Daddy or I kissed him on his forehead goodnight. On this day, I was so energised I ventured to ask him what we did during the day.

Silence. Instead of giving up, I decided to help him answer the question. "We ate pao for breakfast..." I fetched a piece of paper and started drawing as I related what he did during the day. We stopped when we reached the end of the paper. That's when the teacher in me decided to get him to state, as I pointed to the drawings and short phrases, what he experienced during the day.

The next night - we did the same. And the following night too. On the fourth night, I was too tired to go through the whole procedure again. Very nonchalantly, I asked, "So what did Calder do today?" Imagine my surprise when he volunteered the correct answer without first hearing my "model answer". And using "and then?" I slowly coaxed the rest of the day's experience from him.

What a breakthrough! Calder has his own mind! He does register things!

Today, we have a collection of Calder's journals that he likes to read through. Sometimes he would even laugh reading them. He looks especially proud when I take pictures of his journal to send to a friend or relative who has been remembered in that day's journal.

Calder's journal, though simply written, has astounded many people. He can recall colours of seats he took, songs he sang, names etc. It is good evidence and a necessary reminder that behind the odd clapping and bouncing and otherwise-silence is a thinking boy who observes and remembers.

I look forward to the day when Calder can communicate with us not only through his journal but via conversations as well. 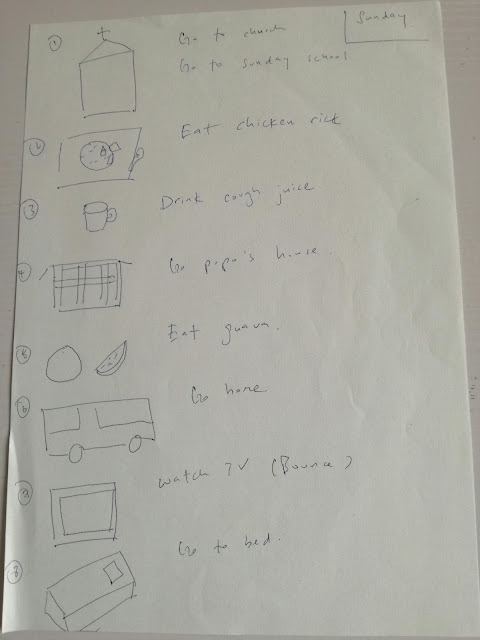 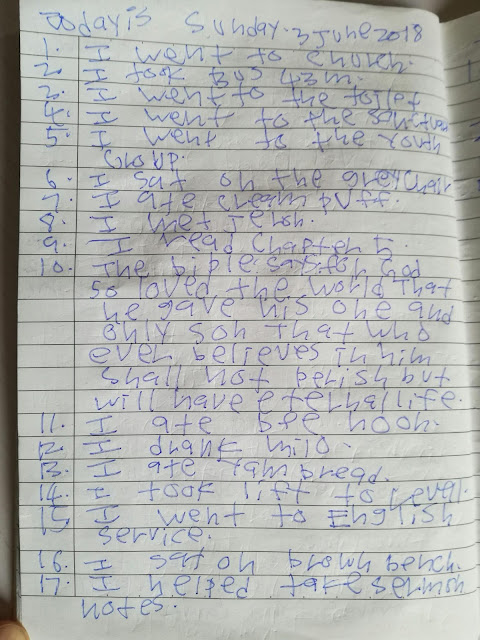